In 2017, on the tri-centennial of the debut of Handel’s “Water Music” and the bicentennial of the Erie Canal, the Orchestra brought the two together in a unique musical event. A barge with 35 musicians took a weeklong tour, stopping for concerts at seven towns along the historic New York waterway.

Water Music NY was made possible by NYSCA, including a planning grant and a subsequent grant for implementation of the logistically challenging project. Concerts, also funded by Empire State Development and I Love New York, were held over the summer in Albany, Schenectady, Amsterdam, Little Falls, Baldwinsville, Brockport and Lockport.

David Allen Miller, the Symphony’s Grammy-winning conductor and music director said he had the idea 17 years ago but it sat on the back burner until it caught the eye of NYSCA’s regional economic development team. “It was unlike anything that had been proposed before,” Miller says.

The seven concerts included seven world premieres by seven young composers. They were embedded in one of the seven communities for four to five months, immersing themselves in the culture, history and stories of each canal town as inspiration for their compositions.

“It’s very site-specific. Very much about place-making,” said Miller. For the symphony, it was also helpful in “getting out of one’s comfort zone.” 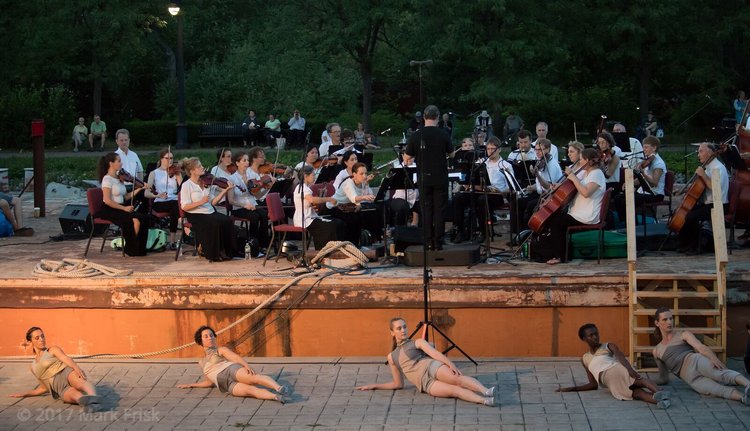 The Orchestra played about 20 minutes of selections from Water Music before each premiere. It ended every concert with 20 minutes of “American Classics," including Copland, “Hoedown” from Rodeo, “Raiders of the Lost Ark March” by John Williams, “Stars and Stripes” by Sousa, and a sing-along arranged specifically for the trip by Roger Zare, combining “Low Bridge, Everybody Down” with “Water Music.” Fireworks concluded the evenings.

“We were trying to bring orchestral music to communities that don’t have that much access to it,” Miller said, noting that 5,000 or more people turned out. “People just embraced it because [it reflected] their place and related to their stories.”

Each concert was coordinated with the local community and included a full day of block parties and activities drawing attention to each community’s cultural highlights and historic character.

Miller said the orchestra has a three-and-a-half-hour music video of the tour and is working with a videographer to repackage the barge trip and the seven performances for online viewing.

He said NYSCA support showed the organization at its best, supporting “out-of-the-box” projects.

“They really believe in what they do and in their mission. It felt like the kind of thing they believe in most. Not just putting on concerts of great music, but celebrating the greatness of our state.”

He called the voyage his personal Fitzcarraldo, referring to Werner Herzog’s 1982 film about an opera-loving madman determined to drag a 360-ton boat uphill in the jungle from one river to another. “It was a monumental achievement and we were so proud it has gone as well it has,” he says.

Calpulli Mexican Dance Company in Queens, New York brings a wide-range of Mexican dance performances and workshops into the community.

We are pleased to announce the launch of NYSCA's FY2020 funding cycle!

Every year, NYSCA brings together hundreds of artists and arts administrators from throughout the state.